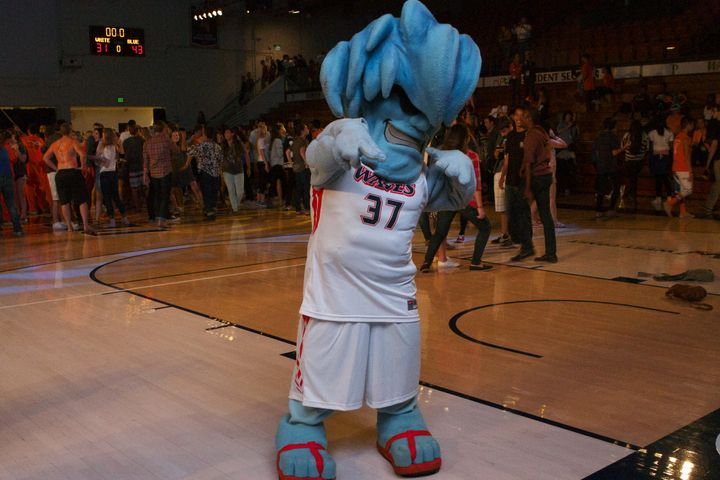 Our own Willie the Wave, while cheeky and appropriate for our ocean-side vista, sometimes looks like a washed-up surfer dude from the late ‘80s. And the fact that he dons a Hawaiian shirt and wears sunglasses indoors certainly does not help. Still, whether he looks like the unaired ‘Doped Smurf’ or a rejected Pokémon design, there are certainly mascots weirder than our beloved Willie.

Stanford has been unable to hold down an official mascot since before they stopped calling themselves the Stanford Indians in the early ‘70s. It was therefore surprising when the idea of the Stanford Tree, which looks like a coniferous Mr. Potato Head decorated by hyperactive second graders, rose organically from the student body. The mascot is the pride of Stanford students and the muffled laughter of everybody else, including some rogue students from UC Berkeley who took the tree hostage in 1998.

It’s a nut. Really? I feel like the fighting pistachios would be a more dynamic mascot.

The Saluki is actually a proud and beautiful dog breed, but the mascot costume of Southern Illinois University is anything but. Its teeth and snout lack the soft dignity of the ancient breed, and it ends up looking more like a rabid hyena.

Against the wishes of UC Santa Cruz administration, students pushed for the yellow gastropod to represent the school in the mid ‘80s. While there is a certain appeal to the school’s fierce demand to chant the name ‘Banana Slugs,’ I think being covered in a thick layer of mucus is enough to qualify as odd.

No it’s not the lovechild of Squidward and Larry the Cucumber, it’s Delta State’s unofficial mascot, the Fighting Okra. While the school has a good sense of humor over their vegetated unofficial mascot (as demonstrated by the video series titled: “Fear the Okra”) … I mean, it’s okra. And it’s not even fried.