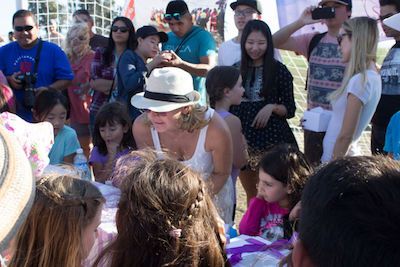 Temporary butterfly tattoo-adorned children and adults with their smartphones ready witnessed a moment of unity in the Malibu community Sunday, Nov. 13 as 1,000 butterflies were released at Malibu Bluffs State Park to support the Emily Shane Foundation.

The foundation’s annual event included live music, a silent auction, a raffle, art projects for children and interactive butterfly exhibits that eventually led up to the release of the butterflies.

The foundation was created by Emily Shane’s mother and father, Ellen and Michel Shane, after Emily was killed in a car crash in 2010 on Pacific Coast Highway. Through their Successful Educational Achievement (SEA) program, the foundation seeks to provide mentorship and tutoring for middle school students.

Chairman of the Emily Shane Foundation Michel Shane said it was “spectacular” how many people came to support.

“It’s a community event,” he said. “We try to do it as a fundraiser but the main purpose of that is not to raise money but to raise awareness [for the foundation].”

More than 100 people were at Malibu Bluffs State Park, which included families, community leaders and volunteers for the event.

Pepperdine freshman and volunteer at the event Hadley Hilgenhurst helped out with conducting the art projects table and educating the kids about butterflies. She spoke of the “fun” she had at the event.

“I think it’s a great organization in the fact that they’ve connected that with something so peaceful as butterflies,” she said. “I think it really brings light into what it can offer.”

Community volunteer Debbie Lush said she was glad to find a volunteer opportunity that matched her favorite cause.

“I’m from Calabasas and I was looking for causes that are about empowering people,” she said. “They empower people to empower others.”

The foundation’s SEA program pairs struggling middle schoolers with mentors and tutors to assist them with particular difficulties. These mentors are usually university students and recent college graduates. The mentorship program has an approximate cost of $10 per mentoring hour, according to the event’s press release. With this event, the foundation hopes to sponsor each of the 1,000 butterflies with $10 for each butterfly. The total would benefit the mentorship program.

Ellen Shane explained the impact that the SEA program has and what they hope this event will do in a speech before the butterflies were released.

“Currently, there are over 90 students across Los Angeles and various communities participating in the SEA program,” she said. “We’re hoping that this event will allow us to hire the additional resources we need to serve those children.”

Shane went on to explain the importance of butterflies as a symbol for the foundation.

“[Butterflies are] our foundation’s symbol and [they] represent transformation,” she said. “Just like our SEA students…we hope to transform them into successful students and children who feel they have a brighter future ahead.”

Mayor Lou La Monte was present to support the foundation and the Shane family.

“I want to acknowledge you for the fact that you have turned this horrible tragedy into a miracle,” he said. “The city has supported it from the day it started and we will continue to do that.”

Hayden Begley, daughter of actor and environmentalist Ed Begley, Jr., was also there to support the foundation.

“I think it’s amazing that they’ve done this, not just from an ecological standpoint but also as a message that’s of rebirth as the founder said,” she said.

Michel Shane said the day was “incredible” and that it is an honor that this foundation is a reality.

“She still to this day is changing the world even though she’s not here,” he said. “In her name, in the actions and in the people she influences, and to me that makes it very special.”

For more information about the Emily Shane Foundation and how you can sponsor a butterfly, check out emilyshane.org and their GoFundMe page. 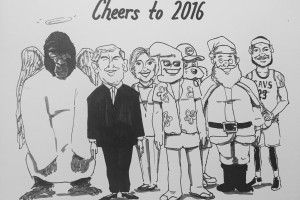