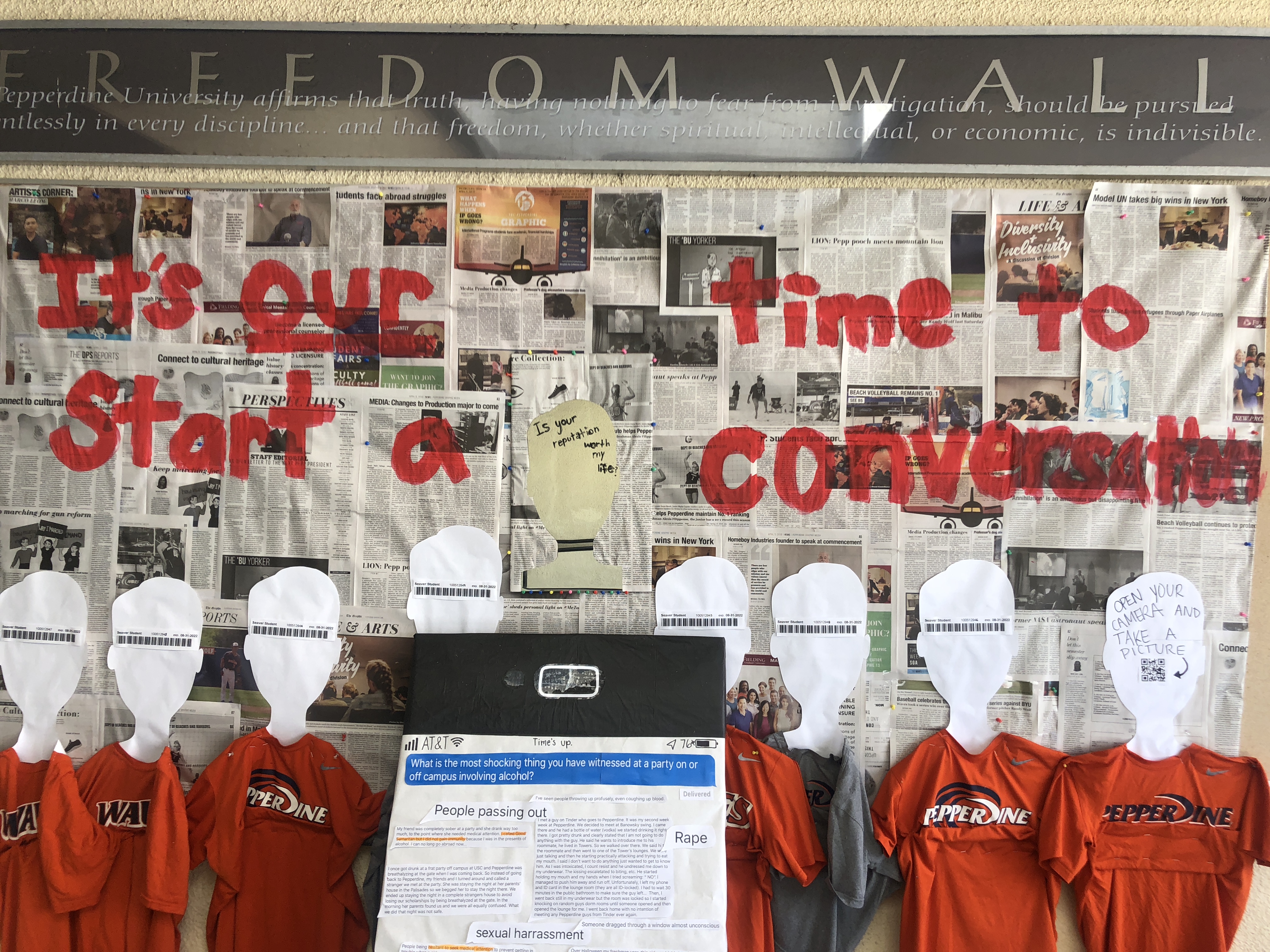 More than 90 anonymous submissions were posted in an online survey made by Pepperdine junior Elijah Zoarski who asked for “ANONYMOUS STATEMENTS, STORIES, QUOTES, or PERSONAL TESTIMONIES that you have experienced or seen on and off campus.”Zoarski used the information collected to create an installation piece on campus and publish a video that accumulated 1,734 views on YouTube with 10 randomly selected students who read them out loud. From alcohol abuse to sexual assault, to racism, to mental health issues, to drug problems, to questions about the Department of Public Safety and Housing and Residence Life, students submitted their candid stories and concerns.

The survey asked students to submit the “most shocking thing they have witnessed at a party on or off campus involving alcohol” as well as whether the student has ever “not spoken up/taken action regarding a peer in need due to the fear of repercussions from the Good Samaritan Policy.”

“When I saw the responses, I was floored,” Zoarski said. “My jaw was on the ground.”

This idea originally started as an in-class project titled: “Conflict Based In a Community.”Zoarski said when he began reading the survey responses, he knew he wanted to turn the project into something bigger.

Junior Julia Dolan said she had a meeting with Zoarski in which she suggested to make a video response to the survey.

“After we received all the responses, we realized that this was a lot bigger than a school project,” Dolan said. “So we decided to make it a movement.”

Zoarski , and other students joining in on the project, also created an installation at Pepperdine’s Freedom Wall outside of the campus bookstore to draw attention to the issue Tuesday, April 10. The installation included paper heads with fake student IDs on their faces wearing Pepperdine shirts, a giant cardboard smartphone displaying survey responses and a head-shaped mirror. The responses included quotes from the students who told their stories, including topics such as “rape,” “sexual harassment,” and “people passing out.”

“We are trying to get an emotional response to unite the students,”Zoarski said. “I’m a communicator. I can fire people up and that is my strength.”

The idea to use “Start a Conversation” as a tagline for the project embodies the goal of this project,Zoarski said. He thinks the university typically does not like to address taboo issues such as this one, but he hopes this project will help bring these issues into the spotlight.

“Right now, how I think about it is [that] we have an issue,”Zoarski said. “The first step to solving a problem is realizing that we have a problem. And I think that’s the first step and that’s when the conversation comes in.”

One of the main issues Zoarski said he wanted to address is the fear in facing these issues so students can be equipped to stand up and help in crisis situations. However,Zoarski thinks this is not just a student issue.

“We plan to start the conversation on campus and eventually get the school to really solidify their Good Samaritan policy so we don’t have a fearful atmosphere on campus anymore,” Dolan said. “People are second guessing helping others because they are scared of getting in trouble. Not having an open conversation is leading to horrible situations.”

On Wednesday April 11, Ezorski found a way to make the conversation bigger.

Students in the audience were able to text anonymous questions to Ezorski, who relayed the questions to the panel. Students brought up questions and concerns regarding the Good Samaritan and alcohol policies at Pepperdine.

Horton responded to concerns about alcoholism on campus in an email.

“We do a survey (the National College Health Assessment Survey) every two years with a large, varied sample of Seaver students. Our results consistently show that there are alcohol-related concerns at Pepperdine but that they are markedly lower than the national average.” Horton wrote.

Since much of the discussion focused on the Good Samaritan Policy, several students voiced their fears of speaking up about issues of alcohol.

“We don’t want students to be afraid of using the policy!” Horton wrote. “The policy is there to help students feel comfortable calling for medical help for another student. We definitely value student safety over rules; that’s why the policy exists. It is concerning and being taken seriously.”

Davis said he believed it was important for him and Beard to attend the forum because it helped them identify common myths and misperceptions.

“It was important to attend that event, because clearly Elijah surfaced some students that were concerned,” Davis said. “While it was frustrating for me to see some myths I’ve been hearing for years… It was good to have Dawn Emrich there and to respond and say ‘That’s not true’ and clarify some of the myths about the policy.”

Emrich said she was honored to be a part of the Pepp Unite event.

“It was evident tonight at the Pepp Unite event that students care deeply about each other and our community,” Emrich wrote in an email. “They desire authenticity, consistency, and clarity. I was honored to be a part of the event and look forward to more conversations in the future.”

One of the main ways Zoarski hopes to see these issues addressed is in the setting of New Student Orientation (NSO) in the upcoming school year. He said he hopes there can be more honesty and transparency in the conversation about alcohol with new students.

“NSO has been a big thing on my conscience,”Zoarski said. “I would love to have someone talk at NSO and say, ‘You will see alcohol on and off this campus and there are going to be situations when people aren’t going to be okay. And here’s what you do in that instance.'”

Students can get involved in a number of ways if they want to have ongoing influence in this area.

“We invite student representation on the Alcohol Task Force, the Healthy Campus 2020 Committee, and through partnering with us so they can lead efforts in their own student groups. Students have the Health Wellness Advisory Board that SGA is helping to expand and empower,” Horton wrote.

Ezorski’s project follows a series of movements and controversies on campus regarding issues surrounding Good Samaritan and Code of Conduct policies.

Correction: Elijah Zoarski’s last name was incorrectly spelled and has been corrected. This was a reporting error.