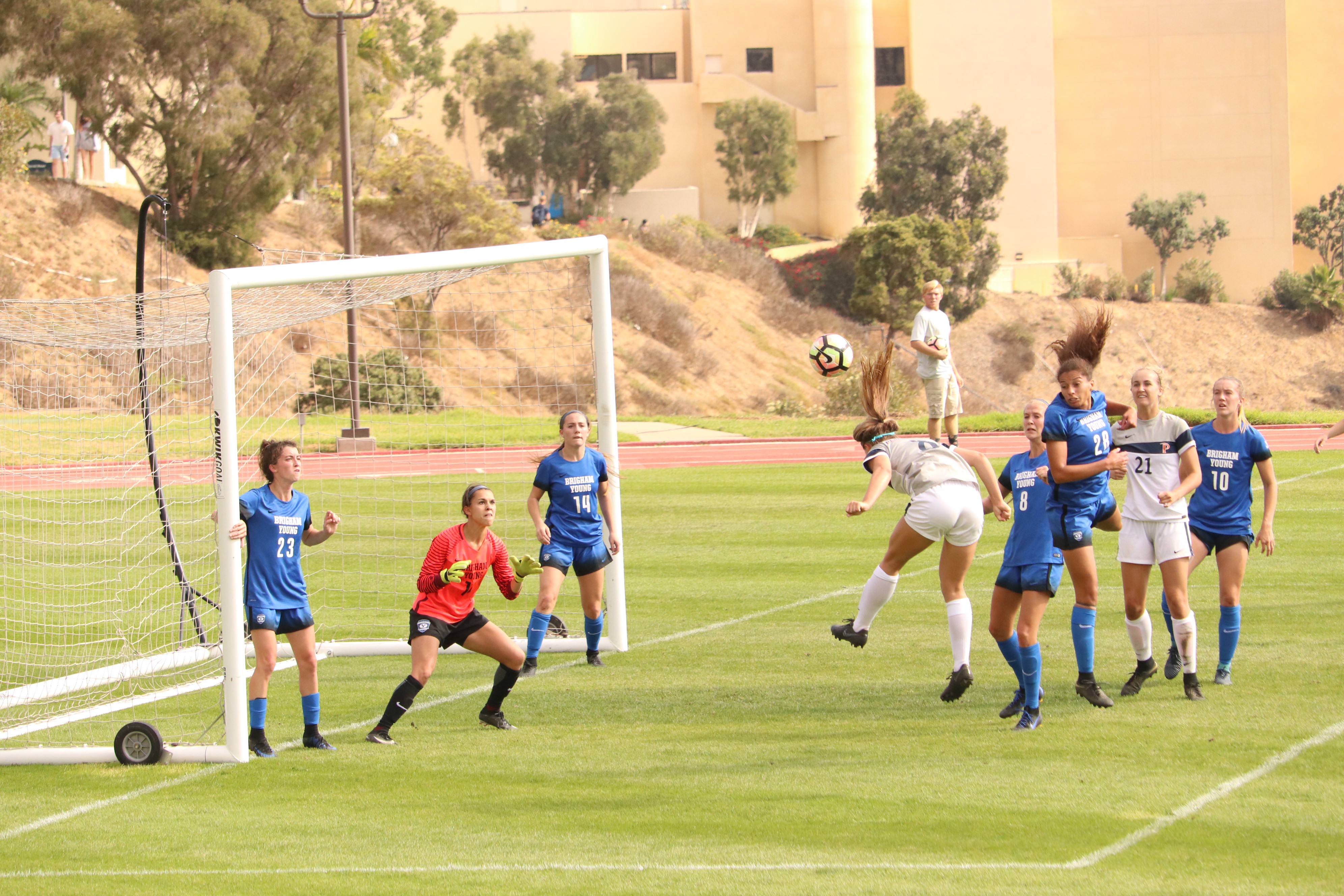 The Pepperdine Women’s Soccer team earned their way to first place in the West Coast Conference after a crucial 2-1 victory with an outstanding header goal off a corner kick against Brigham Young University on Oct. 12.

Senior Michelle Maemone started the game as a forward for the first time since her freshman year. In the second minute, Maemone received an assist from senior Christina Settles and shot back post, scoring the first goal of the game.

“I haven’t played forward since freshman year; I’m usually a defender, so I got to train in that position this week and practice placement shots, not necessarily shooting for power,” Maemone said. “Basically that shot I took was what we have been working on this entire week.”

“It was weird: the weather, the energy … I don’t know what it was, but when [Maemone] made that goal it was out of the blue but that was what fired everybody up,” Coach Tim Ward said. “BYU had really good chances but our defense has been playing really great having only conceded three goals in the last nine games.”

The intensity from both the Waves and the Cougars carried over into the second half when BYU freshman Bella Folino scored, followed by a response from freshman Isabel Nelson 43 seconds later. Nelson scored a goal off a header from a goal kick.

“I think my favorite moment out of this game, as much as I didn’t like when they tied 1-1, was to come right off the kick off to almost scoring a goal then scoring off a corner kick,” Ward said. “It was a pretty awesome response and it says everything you need to know about the character of our team.”

The Waves never let their guard down keeping the game up pace and aggressive by coming back from being scored on and responding with another goal soon after to break the tie.

“After the goal, I was so proud of our team for being able to react the way we did after just conceding a goal,” Nelson said. “I think everyone knew what winning that game would mean and I think everyone was super pumped.”

The Cougars came into the game ranked first in the West Coast Conference while Pepperdine was ranked fourth. However, the home victory has the Waves holding first place with 10 points, followed closely by BYU, Gonzaga, Portland and Santa Clara with nine points.

“BYU is an excellent team. Their coach is one of the best around,” Ward said. “They, like us, have a winning championship tradition so we knew it was going to be a good game.”

Maemone said every game on their schedule is going to be a battle, but with 100 percent effort and just enjoying every second, the Waves can beat anyone.

“As the season has progressed, we have all grown a lot and have figured out what can make us successful,” Nelson said. “Playing together so much has definitely helped our chemistry, which I think shows on the field.”