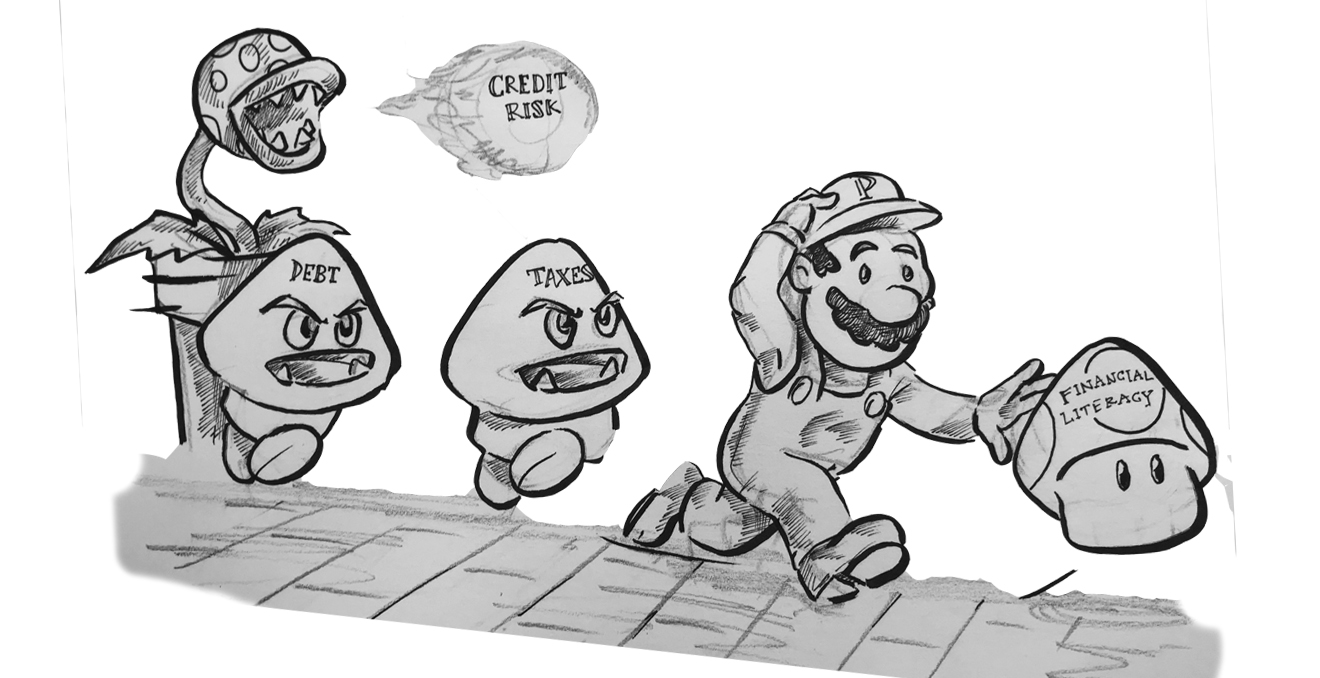 It’s common for students to come to college with the dream that after graduation they’ll have a job, a trendy apartment and other success. If everything goes according to that plan, the job will cover all expenses, including the car and student loan payments, so there can be worry-free happy hour splurges with friends.

But that is not every post-graduate’s reality, and when that reality sinks in, one should be as prepared as possible to tackle their financial future.

Pepperdine’s Center for Financial Literacy states that those in their 20s hold $45,000 in debt on average, and 56 percent of Millennials live paycheck-to-paycheck. The U.S.’s total student debt burden is at $1.2 trillion, which is four times what it was a decade ago.

What’s the most glaring of these statistics is that despite those who graduated in 2016 have, on average, $37,172 in student loan debt, Millennials have a 69 percent in financial literacy following a test performed by the government, which is in the “D” territory, according to The Street’s article from March 27, 2015 “Millennials Get a ‘D’ in Financial Literacy, But Here’s How to Raise That Grade.”

College is the time for undergraduates to introduce and solidify the idea of being financially literate, and this isn’t limited to just seniors. If a freshman has an on-campus or off-campus job, they’ll need to pay taxes just like the rest of the working adult population. Hit the ground running now rather than later and be prepared to face the financial future.

Once the monetary umbilical cord is cut, parents won’t be there to pick their children up when they fall. With rent, bills and other expenses that come with “adulting” in the upcoming post-Pepperdine years, here are some resources for Pepperdine students to become a little more financially savvy so that post-grad life is a bit easier.

Mint is the one-stop shop for all things money management. Once an account number is entered into the app, bills, budgets and credit checks are just clicks away.

Mint can track every payment made and distributes them into categories that track what money is spent on and how often, according to Mint’s website. Every month, users get a report on their account activity and are given tips on how to lessen expenses and save. It’s a good way to keep track of what one spends at Ralph’s and the occasional Ollo brunch each month.

Although a bit more archaic than an app, the envelope system is a more physical (and radical) way to keep track of finances. Step one: Transfer all money into cash. Every cent. Step two: Get out some envelopes.

Label each envelope with different expenses, such as “Student Loans” and “Car Payment,” and everything in between. Divvy up all the cash into budgets for each category, and don’t touch it once it’s in the envelope. Once the money is in there, it doesn’t come out until it’s time to pay bills. Every time you get paid, add the money to the envelopes again. This forces the creation of budgets for every aspect of life, and the pressure to stick to them, according to DaveRamsey.com.

Always paying in cash is another sure fire way to save some money. Time Magazine reported that it is more painful to pay with cash, as one literally watches their money leave their hands, never to return, rather than paying with a card. A debit or credit card isn’t “real money,” or at least doesn’t feel that way when swiped, and therefore it is easier to pay more frequently with a card and not feel as guilty. Using cash more often than a card is a psychological way to trick one’s self into saving more money.

While talk of money is almost always stressful and uncomfortable, there are ways to become more confident on the subject. Research how much that dream apartment is, how much a future lifestyle might cost, and see if it’s realistic. If not, make use of these resources and tips to make it more realistic, so the feeling of empowerment about the future is maintained.