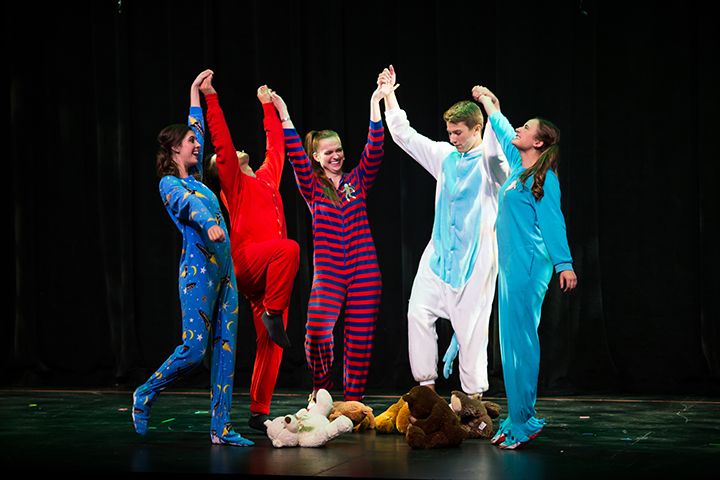 Songfest 2015 takes the audience back in time to our childhood with the theme “March of the Toys,” a simpler time when the only real struggles were when your Slinky was tangled or your sibling let your Play-Doh touch the ground. Once auditions began in October for host positions and lead roles, performers were only a short spin of a top away from putting together one of the biggest campus events of the year.

“It’s a big community event that the students put on together, that anyone can be a part of and that represents who we are as a school and what we do, and the types of relationships we can have, and the things we can achieve together,” Parmelee said. “It’s really exciting for me every year for Songfest to come out because we have a chance to show what we’ve done and to have that experience reach its peak and come to a big bang of a finish, and this year is the same in that way. I’m really excited about this year’s theme. I think we have a really fun theme, and the groups have tackled it pretty well.”

The tradition of Songfest was introduced to Pepperdine’s Malibu campus in spring of 1973, allowing students, faculty and staff to join together in a harmonious homecoming. Last year’s theme was cities and the year before was works of literature. In the past, even faculty and staff have had their own Songfest group.

This year there are seven groups that will compete for the first place prize, which is called the Sweepstakes Award, with the winning group announced on Saturday night after the last performance.The groups this year consist of: Kappa Kappa Gamma and Sigma Chi; Alpha Beta Delta and Company; Sigma Phi Epsilon, Alpha Phi, and Friends; Pi Delta and Friends; Gamma Ghkkkkket Sigma and Friends; Delta Psi Theta and Friends; and Eta Theta Tau.

Guest judges are invited to each performance and will score the groups every night based on a few different categories, including theme, music, choreography, sets, costumes and enthusiasm. With only their own creativity as a limit, each group has a 12-minute maximum time limit, where only two and a half minutes throughout the performance can be spent on dialogue. Each group is led respectively by a student team of producers, directors, music directors, choreographers, writers, technical directors and costumers, who got the ball rolling early last semester. Their rehearsals have gone on for two hours in the evening on a daily basis for the past three weeks, with the exception of spring break.

But Songfest doesn’t start and end with just those seven groups. It also has an electric and talented group of hosts who audition for the coveted spots. This year’s hosts are junior Andrew Duff, freshman Fernando Grimaldi, senior Mindy Lewis, junior Jenna Pautsch and junior Emily Samuel.

“After we were selected, there were several workshops in the fall, and we were part of the process when songs were chosen and skits were created,” Pautsch said. “Once we came back from winter break, we started our weekly Tuesday rehearsals, and then once it got closer to the show we came in every day. What makes being a host so exciting is we really get to fine-tune our numbers and our skits, and we get to have that preparation.”

The hosts perform a variety of musical numbers throughout the show with pop culture references that you’ll remember from your younger years.

After many conversations, random draws and decisions, each team had a toy to center their performances around, including G.I. Joes, Rock ‘Em Sock ‘Em Robots, Furbys, Barbie, Barrel of Monkeys, Magic 8 Balls and Rubber Duckies.

“I’ve had an amazing time doing Songfest being a non-affiliated member of Pepperdine University,” Pi Delta and Friends member Anna Clipperton said. “It’s been so fun getting to know other people, and a great way to make friends and an even better way to come together as a community and celebrate a tradition Pepperdine has.”

Director, Music Director, Writer, Technical Director and Costumer of Kappa Kappa Gamma and Sigma Chi Julia Sumouske said Songfest was a difficult transition for her as a freshman.

“I just went in it and gave it my all, especially with giving direction on my vision of what the show should look like,” Sumouske said. “So we wrote out a script, wrote out characters and placed members where they’d fit most correctly in certain places, and kind of just went from there.”

Sumouske said it’s bonded her with her other members, and they’ve been able to share many experiences that they’ll always remember.

Overall, the purpose of Songfest is to build and bring a community together — not all about the song and dance or who is a soloist or part of the ensemble.

“I think that as a featured performer, I had to focus more on making sure I had words down and choreography down, and that I kept myself healthy throughout the weeks of rehearsal,” featured performer for Eta Theta Tau Lindsey Fleming said. “At the same time though, I don’t feel too much as a featured performer because this is a group effort, and I’m with the team. I’m not the star of the show; it’s all fun when we’re together.” 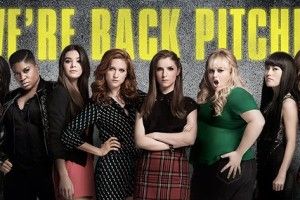 Photo courtesy of Pitch Perfect/Facebook There are a lot of fabulous female comedians that are currently smashing the stereotype...
Copyright 2013 Jupiter Premium Magazine Theme
Back to top