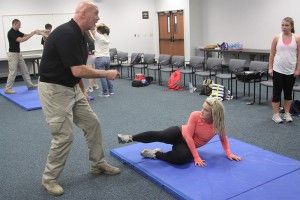 In past weeks, two men unaffiliated with the university have trespassed onto campus and harassed, groped and threatened female students. The men have been released from custody and the university has increased patrols since the separate incidents.

In response, the Department of Public Safety has partnered with Covered 6 LLC, a group of “highly experienced trainers and operators with backgrounds in law enforcement, military and corporate security.” School of Law alumnus Robert Arabian (JD ’95) created the company after a career as a police officer and deputy district attorney.

Covered 6 and Pepperdine are offering personal awareness and self-defense classes. These classes are something that the Office of Insurance and Risk and Public Safety have discussed for some time.

“The university’s wellness specialist has actually been working on the concept for over a year, and once we decided upon instructors, we did not want to delay the offerings any longer,” said Lauren Cosentino, associate vice president of Human Resources for Insurance and Risk.

Cosentino said the recent security breaches were simply the catalyst that spurred the university to offer safety resources to students. Students, faculty and staff have two options to educate themselves on safety: A.D.A.P.T., an acronym for Awareness and Defense Against Physical Threats, or Empower. A.D.A.P.T. will be more lecture-based, while Empower will focus on self-defense moves.

A total of 11 A.D.A.P.T. classes will be held Monday through Thursday all over campus. Ten classes are open to all students, faculty and staff, and a special training session will be held just for Banowsky Hall residents, a women’s dorm that one of the men allegedly entered. The A.D.A.P.T. instructors include Director of Operations at Covered 6 Chris Dunn, a retired captain from the California Department of Corrections Michael Rowan and a bail enforcement agent and self-defense trainer Scott Liers.

Rowan and Liers hosted the Nov. 5 class. During the 90-minute class, the duo discussed having the right mindset and taking preventative measures. They demonstrated combative moves such as punching, elbowing and kicking. For the second half of the class, students broke up into groups and worked through all the techniques in slow simulated actions. Students were also shown how to use Tasers, pepper spray and flashlights as weapons.

The Empower classes are separate workshops offered by Campus Recreation. Empower is a three-part series taught by taekwondo coach Sean Yee in the fitness studio. Yee is the head Pepperdine taekwondo club coach and a third-degree black belt.

According to Yee, it is not gender that makes someone vulnerable — it is certain characteristics such as being unaware of surroundings. He encourages both male and female students to take his remaining two classes on Nov. 12 and 19.

“It’s a good introduction into martial arts and defense,” Yee said. The Empower classes are limited to 30 students. Each class will build upon the previous one and help reinforce what the student has already learned.

If the self-defense classes are successful in the number of participants, Pepperdine will offer them again.

“We wanted to provide them [the students] with opportunities to increase their personal awareness and to feel safe on campus, and this is one of the ways we can accomplish that,” said Assistant Director of Campus Recreation Becci Prather.

There are two reasons I am not a dancer: 1. Lack of free time. 2.There’s this whole thing where I suck at it (linked...
Copyright 2013 Jupiter Premium Magazine Theme
Back to top