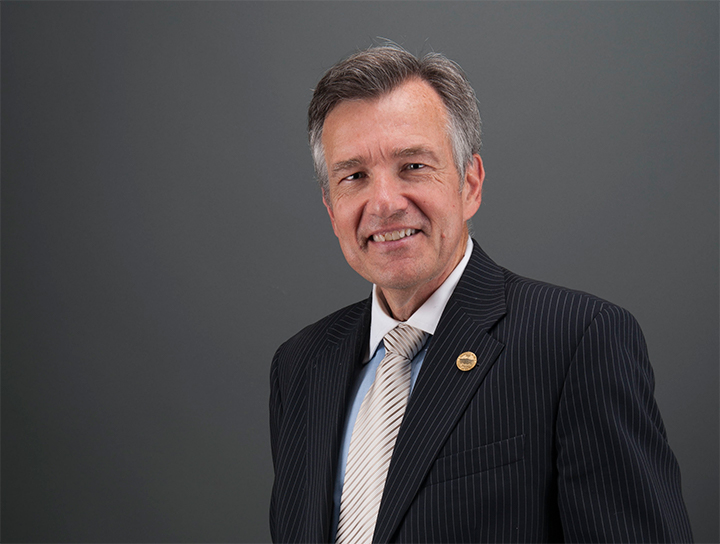 Douglas Kmiec, Rick J. Caruso School of Law professor and Caruso family chair in constitutional law, discussed not only his greatest accomplishments, but also his greatest challenges — the tragic death of two of his closest friends, the end of a relationship and the diagnosis of a terminal illness.

Despite a career that spans over 30 years, the former assistant attorney general for the Office of Legal Counsel and retired ambassador of Malta preferred to discuss family, faith and forgiveness in an effort to encourage others to persevere.

“If sometimes you find yourself on the wrong side of things, or where the breaks are running against you, you’ll remember [my] message and prevail,” Kmiec wrote in an email.

Family – His Source of Vocation

Although Kmiec’s father was an engineer, he loved the relationship between law and politics. His father served as democratic chairman for John F. Kennedy in the 1960 election, and Kmiec said he often accompanied his father to different events.

“I was about 9 years old during that election and my father decided that it would be educational for me to tag along with him to his various meetings … where these larger than life personalities such as John Kennedy and Robert Kennedy would be present,” Kmiec said. “I will always remember meeting them at that occasion and being extremely proud of my father for the work he was doing.”

Following in his father’s footsteps, Kmiec said he volunteered for the Robert Kennedy primary in Indiana when he began college at Northwestern University, before earning his J.D. from the University of Southern California.

Because Kmiec had to learn each client’s discipline and be knowledgeable in a wide variety of subjects, he said he thought being a lawyer would never grow boring. The law fascinated him, and he said he viewed it as an instruction manual for how to do good.

“I’d like to hope that I was known for … trying to volunteer my time, supplies and possible solutions to things that are burdening people through legal ideas without expecting that in return, there would be some reward,” Kmiec said.

Kmiec, who aspires to dedicate his life to others, said his faith teaches him not to put himself first in life. He has always strived to be a good husband and father, proudly pointing to his three daughters and two sons as his greatest accomplishments; he is motivated by strengthening his relationships with his children and grandchildren.

“People should know that the thing I enjoy most is their company,” Kmiec said. “I wish often times that the world was no larger than a small town’s main street where every person you walk by had a smile, or a ‘good morning,’ or a ‘good afternoon’ and took time to genuinely find out how life was for them.”

Kmiec said his career flourished when he was accepted to the White House Fellowship in 1982. This enabled him to later serve Presidents Ronald Reagan and George H.W. Bush as assistant and deputy assistant attorney general for the Department of Justice’s Office of Legal Counsel.

The decision to begin working at Pepperdine in 1995 was an easy one, Kmiec said. His children loved the campus and begged him to stay, and because he said he orders his life around their happiness, he did. He said he appreciates that faith is a natural part of the conversation on campus and that he is able to accept opportunities outside the classroom that further his students’ learning. 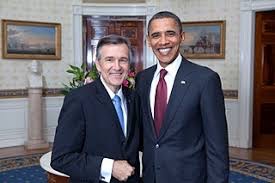 Kmiec, who ran as an independent candidate for Congress in 2014, received attention from other Catholics when he publicly endorsed Barack Obama during the 2008 election. He said he remains bipartisan in a partisan world by recognizing opportunities for cooperation between political parties. There are always multiple ways to interpret an issue and he views others as “intellectual adversaries” rather than enemies, he said.

Kmiec served President Obama as the U.S. Ambassador to Malta from 2009 to 2011; during this role, Kmiec said he faced one of his biggest but most successful challenges, which he describes in his book “Lift Up Your Hearts.”

Former Secretary of State Hillary Clinton, for whom he said he had hoped to serve as Vice President, asked him to rescue 338 people from behind shooting lines in Libya without military forces during the Arab Spring. Desperate, Kmiec borrowed a friend’s catamaran. Despite encountering a category-5 winter storm with over 15 feet waves, everyone was brought to safety.

“A big ship, especially a catamaran with a double hull, gets tossed pretty vigorously in a storm such as that, and while a few people were injured in a minor way, thankfully no one suffered great injury and even the pets made it,” Kmiec said.

Not all challenges, however, have a happy ending.

Kmiec said he was driving a car that went off the road, injuring himself and killing two of his closest friends.

“In essence, you have to live for two, or in this case three, and when you’re living for two good people, that is an extraordinary responsibility,” Kmiec said. “There’s not a day that goes by without thinking about how I can help someone in some way and dedicate that to these two lovely people that perished.”

Kmiec has since been diagnosed with Parkinson’s disease, which he describes as a constant challenge. Kmiec said he is more troubled, however, by the end of his marriage after 38 years.

“While I have been given a particularly challenging dose of death, disease and unwanted divorce, in most lives, it is virtually impossible to avoid disease and the death of those we cherish,” Kmiec wrote in a follow-up email. “It’s how we react to the knowledge of the fragility of life that makes the difference. Do you fight the disease? Do you hold onto the memory of your friend? And if divorce comes your way, do you continue to observe your own promise to love until eternity?”

Kmiec said although he prefers to focus on the future rather than the past, he shares the experiences that shaped his life in an effort to be an authentic teacher and friend.

These events, he said, are not defined by sadness. As his father always reminded him, “If you’re ever feeling down, just remember that you can’t lose if you have faith, courage and enthusiasm.”