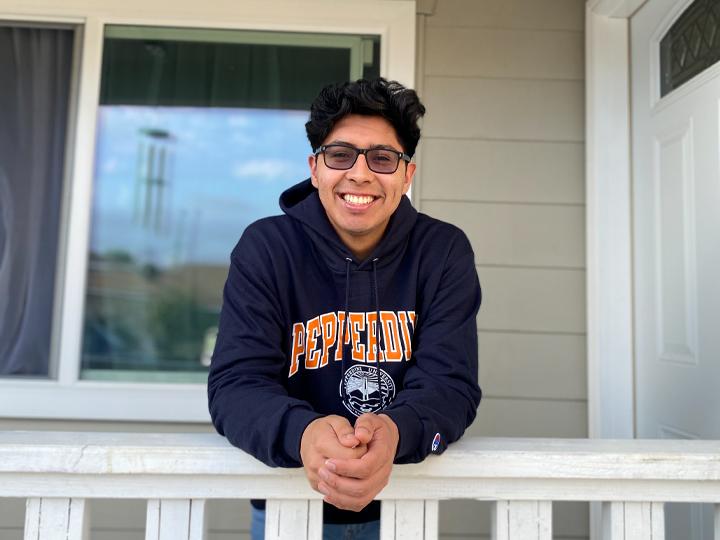 First-year Ethan Barragán leans over the porch at his home in Hawthorne, Calif., in October. He said he would love to work in policy and often spends his free time listening to podcasts and researching current events.

First-year Political Science major and Communication minor Ethan Barragán said his dream job is to work on political campaigns. While most young adults his age were voting for the first time, Barragán got involved in the election process by reaching out to his local representative, Maxine Waters.

He carries this passion for politics over to his participation in several extracurriculars at Pepperdine. Barragán is a member of the Latino/a/x Student Alliance, the Catholic Student Association and is an intern for the Resilience-Informed Skills Education program. He said he started participating in virtual conferences with the Model United Nations club to work toward his career goals.

At the most recent virtual MUN conference, Barragán said it pleased him to represent Mexico, as his grandparents emigrated from there. He enjoyed staying in character and speaking on behalf of the Mexican delegation.

“It was really nice to be able to find a passion of mine, which is international affairs, and push myself by working with upperclassmen to go to virtual conferences,” Barragán said. “We got recognition; we got distinguished delegation. So I felt like that really encompassed all of our work.”

During the Spring 2022 semester, Barragán plans on studying abroad in Washington D.C. to chase his passion of working in policy. He said he wants to get an internship on Capitol Hill or with a non-governmental organization since policy is something he hopes to pursue after college.

“My dream internship would have to be working possibly with a representative, such as Ted Lieu from the district near mine or even my own district,” Barragán said. “I’ve never really considered nonprofit, but maybe I’d love to give back to certain community groups — refugees, immigrants, women — I’d also love to be a part of helping them.”

Barragán also interns with RISE, a Pepperdine program with goals to help students develop their resilience skills, which is something he is passionate about. He is able to work with other first-years to spread what the six pillars of resilience are and made friends by helping lead the program. He said it has been difficult to reach out to other Pepperdine students during a virtual semester.

“Leading by example is something that has been instilled in me through my supervisors through training and through my lessons that I give,” Barragán said. “Understanding that I have to have an open mind and sort of have a glass half full sort of mentality, especially during COVID and during virtual learning, it’s something that’s basically been essential.”

Through RISE, Barragán is able to tutor LAUSD third grade students, which he said is something he enjoys doing on weekends. He was also a RISE pod leader last semester and helped plan the RISE community in Seaside, which is where he will be living in the fall.

“It’s been really nice to take that off from the ground because we were planning a community and then now it’s happening,” Barragán said. “It will be really nice to sort of build this camaraderie around students, especially since the Class of 2024 has really missed out on the first year of building relationships.”