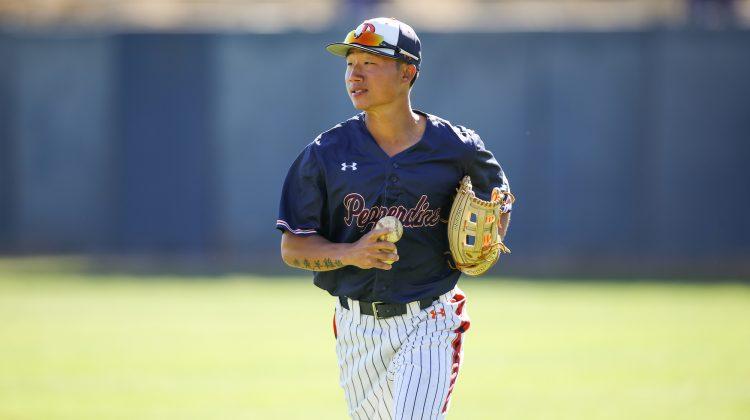 But for walk-on athlete Ethan Suh, the process of joining the Pepperdine Baseball Team was anything but a walk in the park.

“The amount of times that I failed and didn’t stay down, I got right back up and tried again, that was a big deal for me,” said Suh, a senior Integrated Marketing Communication major.

Growing up in Ridgewood, New Jersey, Suh’s family is made up of die-hard Yankees fans. Suh played baseball consistently in his youth and won numerous tournaments with his Little League team.

But Suh said he thought his baseball journey would end when he came to Pepperdine in Fall 2018. Suh decided to come to Pepperdine without a baseball offer to follow his dream of moving to the West Coast.

Suh said he realized midsemester how hard it was to step away from the game.

“I’m walking to classes and seeing the baseball field every day,” Suh said. “And I was like, ‘This is too hard, I’m just going to go for it.’”

Suh said walking into Head Coach Rick Hirtensteiner’s office for the first time was one of the most intimidating moments of his life. After Suh introduced himself and requested a tryout with the team, Hirtensteiner told him they were too close to the upcoming season, and to come back next season.

Although Suh said he felt positive about how tryouts went the next fall, Hirtensteiner told him he hadn’t seen enough from him to offer him a spot on the team.

“At this point, I’ve had two daggers in my chest,” Suh said. “My confidence really went down the drain, but I told myself, ‘Hey, you can’t give up now, right?’”

Suh said he petitioned Hirtensteiner for another chance, which translated into a 13-day trial period with the team.

On the first day of the trial, Suh said he showed up wearing his hometown team’s jersey and a pair of shorts. It was obvious to everyone who was on the team and who was still trying out. Despite the difference in appearances, Suh said he played some of the best baseball of his life during that tryout period.

But Suh’s talent on the field wasn’t the only thing the coaching staff and players noticed. Since he had class right before the team practiced, Suh said he would run down Lower Dorm Road toward the baseball field, in full view of the team.

“[Coach Hirtensteiner] would always see me sprinting down from my class,” Suh said. “He would tell the other people on the team, ‘That’s what you should be doing. That kid wants to be out here everyday.’”

At the end of the 13 days came the moment he had waited for: his own locker and a Pepperdine jersey.

“It felt surreal,” Suh said. “It felt that much better because of the amount of hard work that I’d put into it. I’m a very goal-oriented person, so once I set my mind on something, I’m going to work hard for it no matter what.”