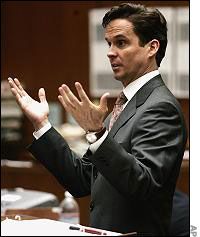 “I believe the general value system that Pepperdine imbues in their students is paramount for anyone in law,” Jackson said.

After graduating from high school, Jackson enlisted in the Air Force. He spent four years as an Airman before earning a bachelor’s degree in government from the University of Texas at Austin. This experience helped solidify his desire to “help those who cannot help themselves.”

On Oct. 16, Jackson’s campaign unveiled a television advertisement entitled “Protect.” Some critics have called the ad an “attack” on his opponent and current Chief Deputy District Attorney Jackie Lacey. In the ad, Jackson describes Lacey as “a good person” and continues to say she is “a political appointee who was dishonest under oath to protect her boss.”

“The ad is no way an attack on anybody,” Jackson said. “The ad is a truthful recitation of the facts. I’m in the business of telling the truth. That’s what the district attorney’s office is. Everything said in the ad is absolutely true and we stand by it whole wholeheartedly.”

In his 17 years as a prosecutor, Jackson has seen the most high profile cases in L.A. County. He was successful in the second-degree murder conviction of music producer Phil Spector, and he also prosecuted and won the murder case of auto-racing legend Mickey Thompson.

Jackson said he has a deep desire to be “the lawyer for the people” in order to bring security to the LA community. The courtroom veteran understands prosecution. “At the end of the day it’s not done in a conference room, it’s done in a courtroom,” Jackson said. If elected, he intends to prosecute “firmly but fairly.”

Jackson’s four-point plan to ensure public safety is to end public corruption, reduce violent crime, stop crime before it starts and have a special focus on high-tech crimes.

Jackson believes that voters want a modern prosecutor and not a politician. A modern and innovative approach is necessary in today’s courtroom. He believes that the new DA must have an eye toward progress. He or she must be able to utilize the most up-to-date legal philosophies, principles and crime-fighting technology.